Johne’s (pronounced Yo-Nees) is a “zoonotic disease.” By definition, zoonotic diseases are those that can spread between species and can “spill over” from animals to humans. Ebola, Mers, HIV, bovine tuberculosis, rabies and leptospirosis are among zoonotic diseases that cause over 2 billion cases of human illness and more than 2 million human deaths each year. That was before the outbreak of COVID 19.

The bacteria responsible for Johne’s Disease, M. a. paratuberculosis (referred to as MAP), consistently appears in humans with Crohn’s Disease, though a direct causal link is not yet confirmed. MAP is also associated with irritable bowel syndrome, rheumatoid arthritis, Type 1 diabetes, and colorectal cancer in humans. But the NPS hasn’t considered Johne’s Disease in the Environmental Impact Statement in its proposed plan for ranching at Point Reyes National Seashore.

The NPS doesn’t require that the cattle be tested for Johne’s Disease. However, the NPS periodically tests a sampling of Tule elk for Johne’s (which requires killing the wild elk). Some elk tested positive. How can this be?
Dairy cows at Point Reyes National produce 100,000,000 pounds of manure annually. The manure is spread over the pastures as slurry, which runs off into the park’s waterways. Wildlife susceptible to the disease, like elk, come into contact with it.

Based on data from state and federal agencies that routinely test water for bacteria and other contaminants, a Center for Biological Diversity analysis found creeks at Point Reyes National Seashore to be in the top ten most contaminated sites in the state of California.

According the U.S. National Advisory Committee on Microbiological Criteria for Foods, “MAP bacteria survives in cattle feces, water and soil… and can come into contact with food crops that result in human exposure.” The pathogen can remain viable in water and soil for a year or more. MAP has been detected in ground beef, raw and pasteurized milk, cheese and infant formula.

The Johne’s Information Center at the University of Wisconsin’s School of Veterinary Medicine is a clearinghouse for research on the disease, which exacts a heavy toll on the dairy industry. Dr. Michael Collins has published widely on Johne’s and has studied the elk at Point Reyes.

“MAP is a promiscuous, insidious, zoonotic, foodborne pathogen that threatens the economic viability of livestock producers, the health and well-being of wildlife, zoological collections of wild ruminants (many of which are endangered), and humans,” says Collins.

“MAP is an equal opportunity infection. It attacks cattle of all breeds on farms of all sizes and types… this is not a problem caused by so-called ‘factory farms.’  Organic dairies are just as likely to have a Johne’s disease problem as any other…“It deserves far more research funding and control-program investment than it currently receives.”

“As we dug deeper into the science and spoke with leading researchers, we learned that Johne’s Disease isn’t a problem just for wildlife, but a potential health risk to humans,” says Deborah Moskowitz, President of Resource Renewal Institute. “It’s a risk to the public that the park service needs to address.”


DONATE
Your donations in any amount are welcome and are tax deductible.
Click here to make a donation.

POINT REYES, CALIFORNIA: While the Bay Area has been quarantined over the coronavirus, activists in Northern California have been analyzing thousands of public comments sent to the National Park Service (NPS) in response to its controversial draft plan for cattle grazing at Point Reyes National Seashore. Their analysis reveals that more than 90 percent of the 7,627 comments submitted to the NPS oppose ranching in the national seashore. The final NPS plan—expected out this spring—will determine the future of ranching and wildlife in this national park for decades to come. The NPS appears to have dismissed the public’s overwhelming opposition to its proposed plan. “The number of comments received on an alternative is not a determination of its merit for consideration,” said Seashore Outreach Coordinator Melanie Gunn.

All 7,627 coded comments can be viewed in full,  along with an analysis and description of the methods used.

The NPS’s six proposed management alternatives in the Draft Plan and EIS:

Alternative A – no change in the NPS’s current ranch management

Alternative D – like B but phase out ranching on 7,500 acres and issue grazing leases for 19,000 acres with 20-year terms, and allow some diversification.

Alternative F – phase out all dairies and ranches over 5 years. Once ranching is gone, remove the fence that confines the Pierce Point tule elk herd. New elk herds allowed to establish in the park.

In the midst of an urban population of more than 7 million people, Point Reyes National Seashore and its neighboring park, the Golden Gate National Recreation Area, are unique fragments of wild California. Rare bunch grasses and wildflowers, Tule elk and spawning salmon are among more than 1,500 plant and animal species that depend on these national parks. Of these, more than 50 animal species and 50 plant species at Point Reyes Seashore are listed as rare, threatened, or endangered. Millions of visitors arrive annually to experience the wild Pacific coast, wind-swept grassy vistas, and landscapes that still hold remnants of what California looked like before European Contact. These national parks are at the center of a tug-of-war between public and private interests that soon will determine the future of these parks.

END_OF_DOCUMENT_TOKEN_TO_BE_REPLACED

Political forces, climate change, pollution, and accelerating rates of extinction have converged to threaten the places we all own in common. The pressure is on to allow oil and gas development, mining, hunting, logging, and grazing in some of our most beautiful, biologically diverse, and historic places—national parks, monuments, wilderness, and recreation areas. Although we all support public lands through our taxes, private interests are increasingly emboldened to exploit them for private profit. To make matters worse, federal budget cuts have led to crippling staff reductions at a time when demand for outdoor recreation and visits to our national parks are at an all time high. How do we defend America’s heritage and ensure that national parks will be “unimpaired” for generations to come?

Read more about Threats to Parks and Public Lands 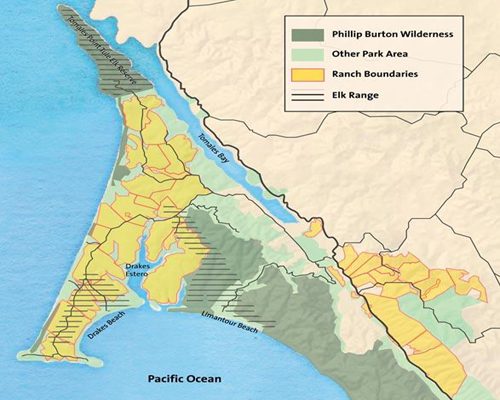 Urbanization, livestock grazing, logging, and agriculture have fragmented California’s native landscapes. Less than one percent of California’s grassland is still intact today. Remnants of once-vast coastal prairies still exist at Point Reyes National Seashore and the Golden Gate National Recreation Area, with the potential to recover the rich biodiversity that has been lost to decades of cattle operations. To provide refuge for wildlife; restore habitats for threatened and endangered species; improve water quality; provide educational and volunteer opportunities; sustain cultural traditions of native peoples; preserve America’s natural heritage—is this not what our national parks were created for?

Read more about the Benefits of Restoration

Speak Up for Your Park

Does ranching further the purposes of the national seashore? Are park ranchers who sold their land entitled to permanently profit from it? Who benefits from ranching? Do those benefits outweigh impacts to the climate, land, wildlife, and public enjoyment of the national park?

We all are have a stake in the future of our public lands. Polls show that the public favors greater protection for national parks and monuments. But agricultural interests have opposed the scientific analyses and management planning that the Seashore needs and the public deserves. They are working behind the scenes to change the law rather than risk that a concerned public will derail their plans for the Seashore. That’s why it’s crucial to stay informed and to take part in the planning process.

What and Who are Parks For?

Private ranching on 28,000 acres at Point Reyes National Seashore and the Golden Gate National Recreation Area is heavily subsidized by taxpayers. Impacts from the 6,000 beef and dairy cows at these parks are well documented: soil erosion, water pollution, invasive plants, declines in fish and bird populations, conflicts with wildlife, loss of public access to public land. Native Tule elk, the iconic symbol of Point Reyes Seashore, are found in no other national park. Most of the elk are confined behind an 8-foot-high fence to keep them off parkland leased for cattle grazing. Now, ranchers at the national seashore are pushing to “diversify” their operations. They want to add more livestock like sheep, goats, and chickens, and grow row crops. This calls into question the purpose of our national parks.

What—and who—are our parks for?

Under a 2016 court ruling, the Park Service must analyze the impacts of cattle to natural resources, wildlife, and recreation at Point Reyes Seashore and the adjacent Golden Gate National Recreation Area. The Park Service is required to prepare an Environmental Impact Statement (EIS) and update the Seashore’s 40-year-old General Management Plan (GMPA). The planning process gives the public a voice in deciding the future of these national parks. The articles, studies, and historical record assembled on this website are intended to inform and empower you to take action. Your comments are crucial to regaining the ecological balance and abundance of our national parks that are every Americans rightful heritage.

Read more about the General Management Plan and view Public Comments to the initial scoping document.